HISTORY OF THE Y

The YMCA Movement
1844 The YMCA was founded in London, England by George Williams
1851 The first YMCA in the United States is founded in Boston, MA
1861 The YMCA provided nursing, shelter, and other support during the American Civil War.
1885 Camp Dudley, the first residential camp in the United States and North America, was established.
1891 Basketball was invented at the YMCA Training School in Springfield, MA by James Naismith
1891 Luther H. Gulick, who revolutionized sports and physical fitness at the YMCA, proposed a red equilateral triangle as a symbol in 1891. The sides of the triangle stood for “an essential unity: spirit, mind, and body.
1896 A second ring is added to the Y logo. It is said the =second ring represents friendship and love without end among individuals.

Our Local YMCA
1883 The Y is founded in La Crosse. E.E. Bantley serves as the Ys First Board President and M.B. Williams serves as the first General Secretary.
1884 394 members join in the first year
1895 The Y occupies La Crosse’s Scandia Building
1907 A capital campaign is launched for the new Y facility in La Crosse – $90,000 is donated for construction and furnishings.
1909 The Y facility at 7th and Main in La Crosse is dedicated by President Taft on September 17, 1909. 20,000 residents attend the dedication. 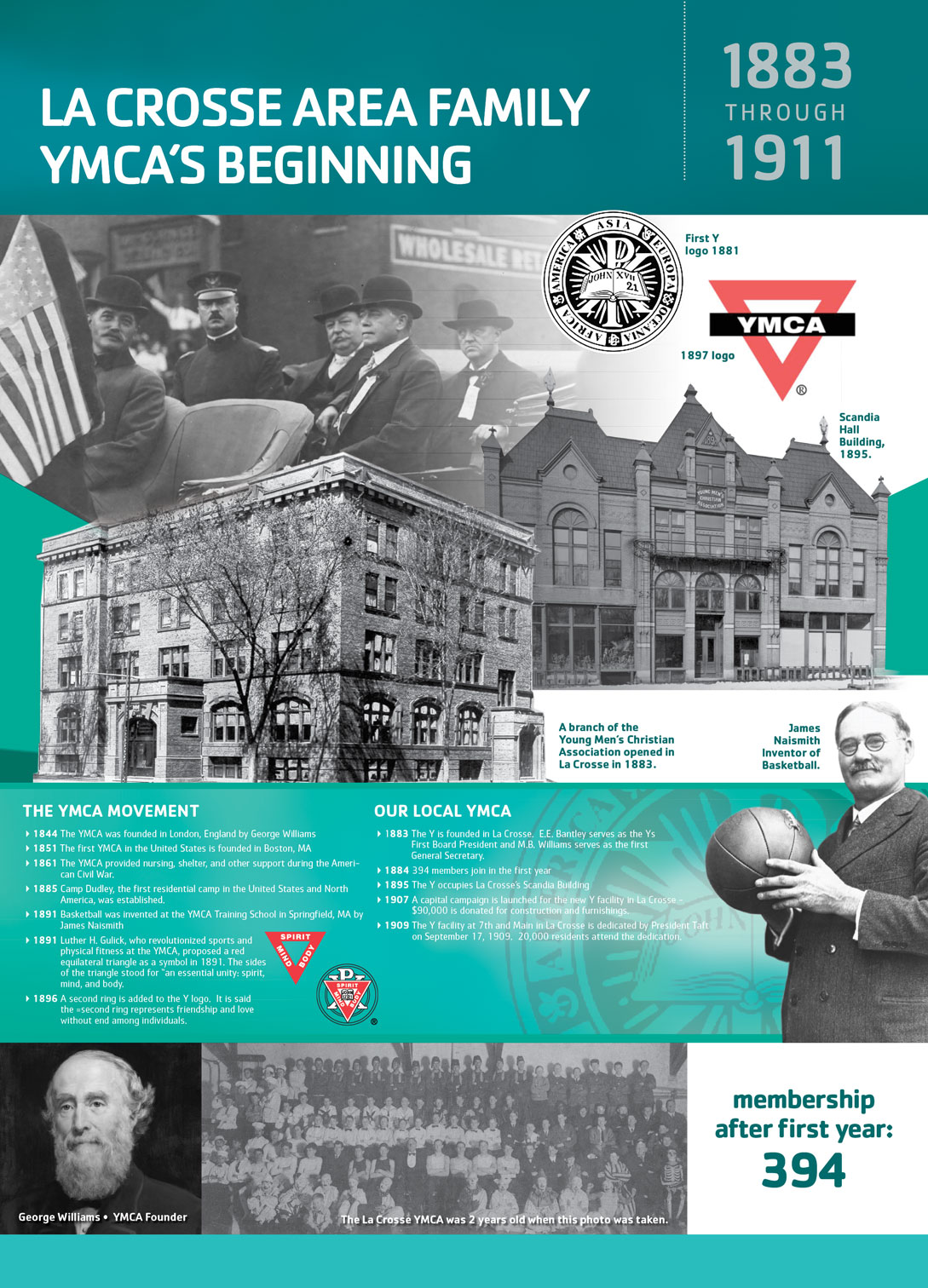 The YMCA Movement
1914 During World War I the YMCA raised and spent over $155 million on welfare efforts for American soldiers. It deployed over 25,000 staff in military units and bases from Siberia to Egypt to France.
1939 During World War II the YMCA was involved in supporting millions of POWs and in supporting Japanese Americans in internment camps. The YMCA set up War Prisoners Aid to support prisoners of war by providing sports equipment, musical instruments, art materials, radios, eating utensils, and other items.

Our Local YMCA
1929 The Y purchased Camp Bradfield in the Black River Falls area.
1943 Ken Dahl began his Y volunteer service. During his lifetime, Ken served as a Y Board Member and Trustee for more than 60 years, serving as Board President in 1958, 1960, and 1961.
1960 Decision made to build the YMCA-YWCA (The current Dahl Family YMCA). 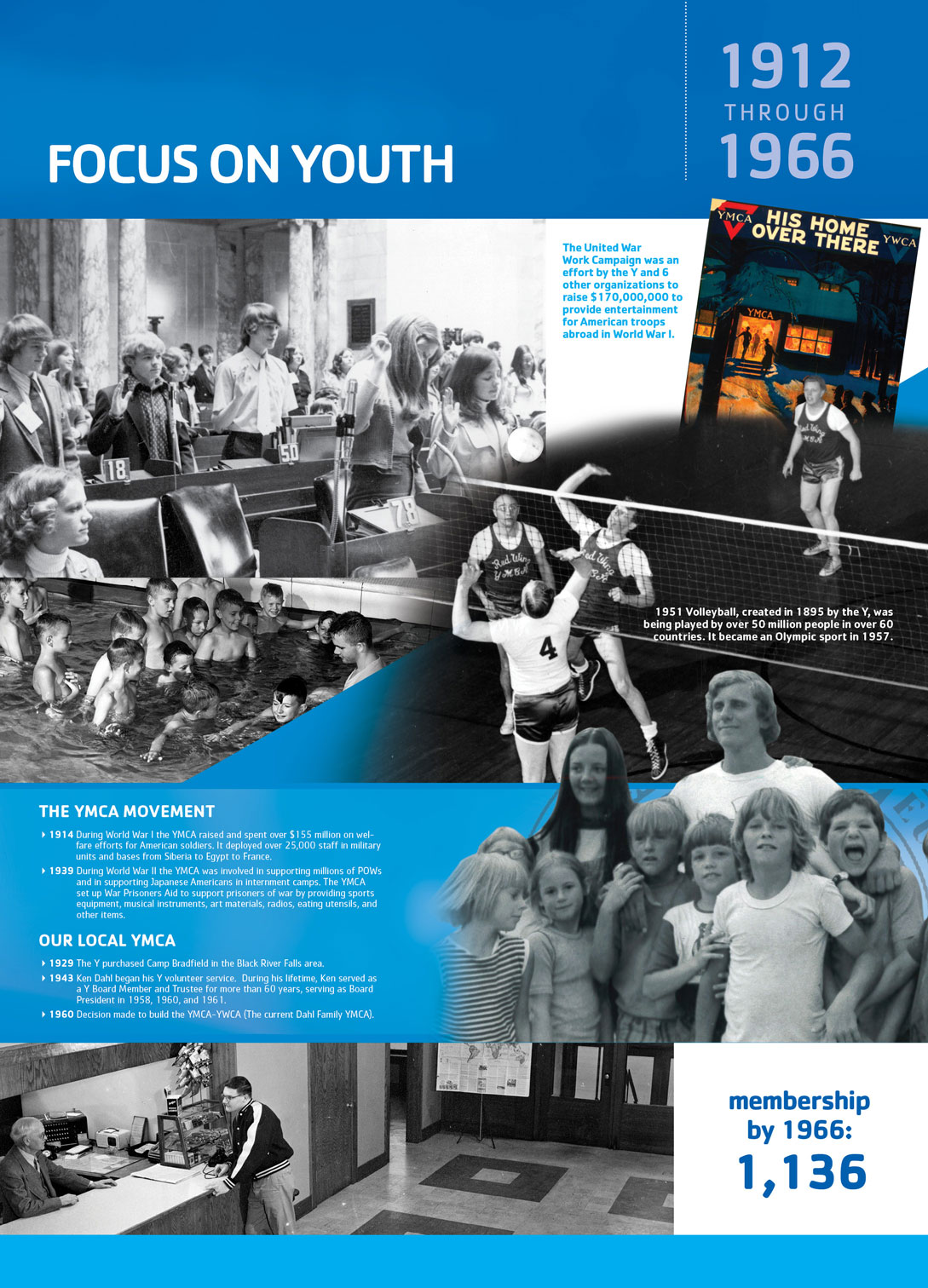 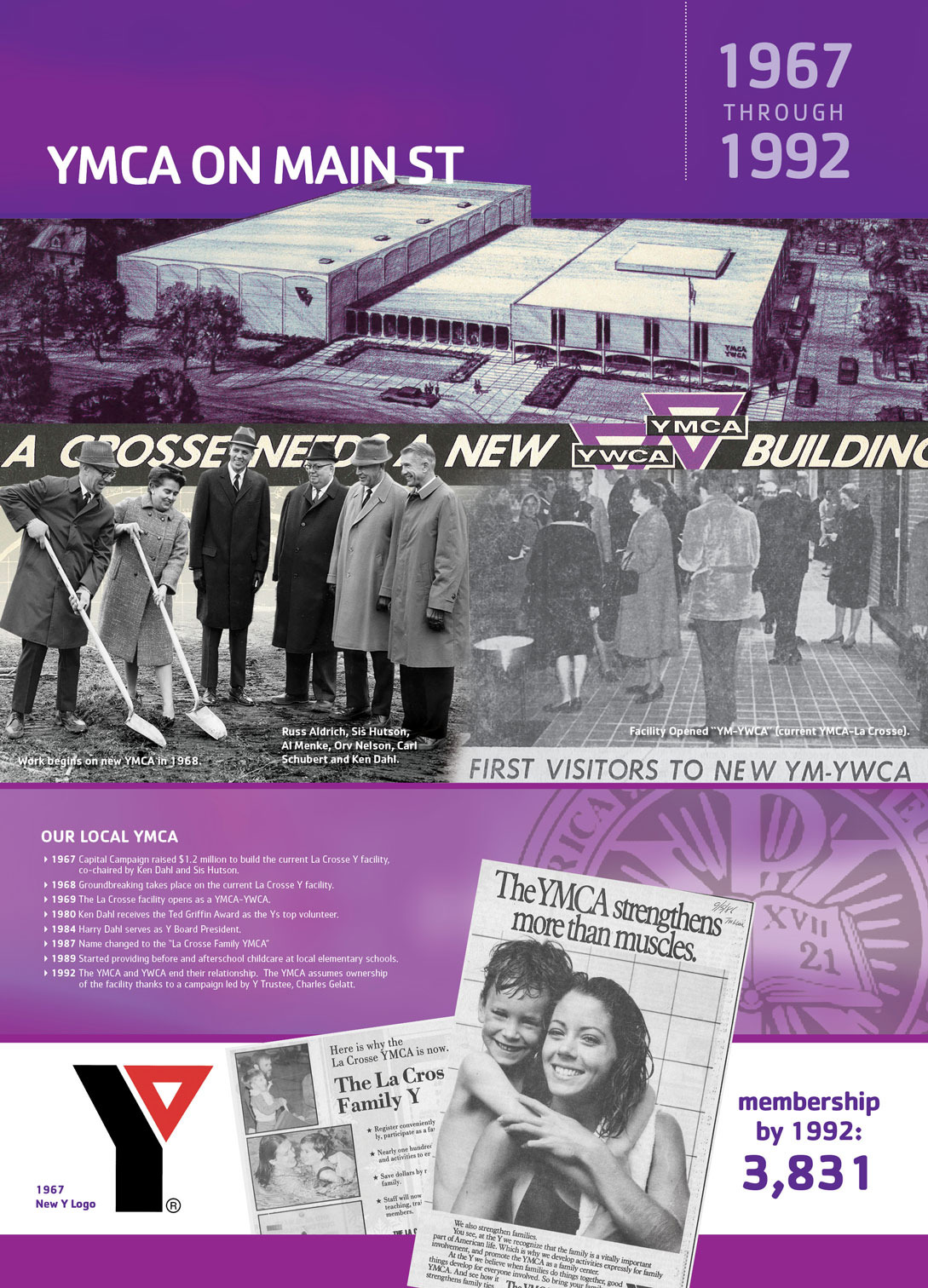 Our Local YMCA
1994 Warren and Nancy Quinlisk donate land in Onalaska for the future Y North facility.
1998 The Rundle Family lead the way in the effort to remodel portions of the La Crosse Y, name the Rundle Aquatic Center, add the Family Fun Center, and the whirlpool.
2003 Harry Dahl and Dave Skogen co-chair the Second Century Campaign and raise
$9.3 million to build the Y North Facility.
2003 Ron Houser begins his relationship with the Y and plays a major role in the campaign to build the Y North facility.
2004 The Dahl, Houser, and Skogen families lead the way in making the capital campaign a success.
2004 The Community Teen Center home first opens.
2005 Construction begins on the Y North facility.
2006 The Y North facility opens to serve the communities north of La Crosse.
2009 The Miracle Baseball Field opens to the community. 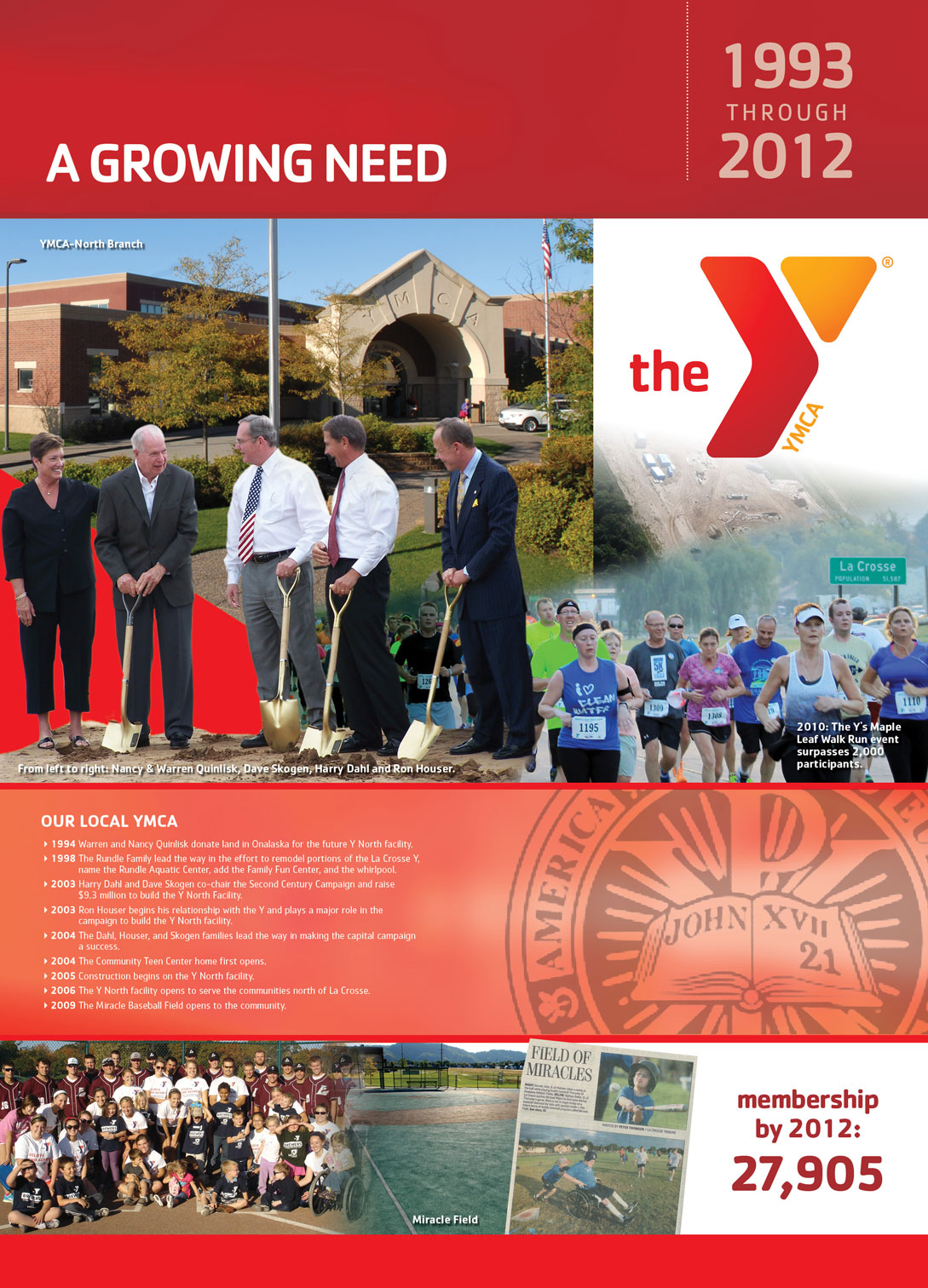 Our Local YMCA
2011 Andrew Dahl serves as Y Board President (Third generation)
2013 Growing membership and program numbers lead to expansion plans for both Y facilities.
2014 Don Weber chairs the Capital Campaign to remodel and expand both Y facilities. $10.6 million in gifts is secured for the project.
2015 The Ys new Community Teen Center opens to the community with a focus on mental health.
2015 Construction begins on the expansion and remodeling of the La Crosse Y and Y North.
2016 The YMCA and Gundersen Health System partner on the construction and development of the community’s first Healthy Living Center – located within the La Crosse Y.
2016 The Y North facility is re-dedicated as the R.W. Houser Family YMCA in honor of the Ron and Elisa Houser Family.
2016 The La Crosse Y facility is re-dedicated as the Dahl Family YMCA in honor of the Dahl Family.
2016 The Y creates the community’s first Food Forest
2018 Today (30 years later), the Y provides before and after school care for 1,000 children in 4 school districts. 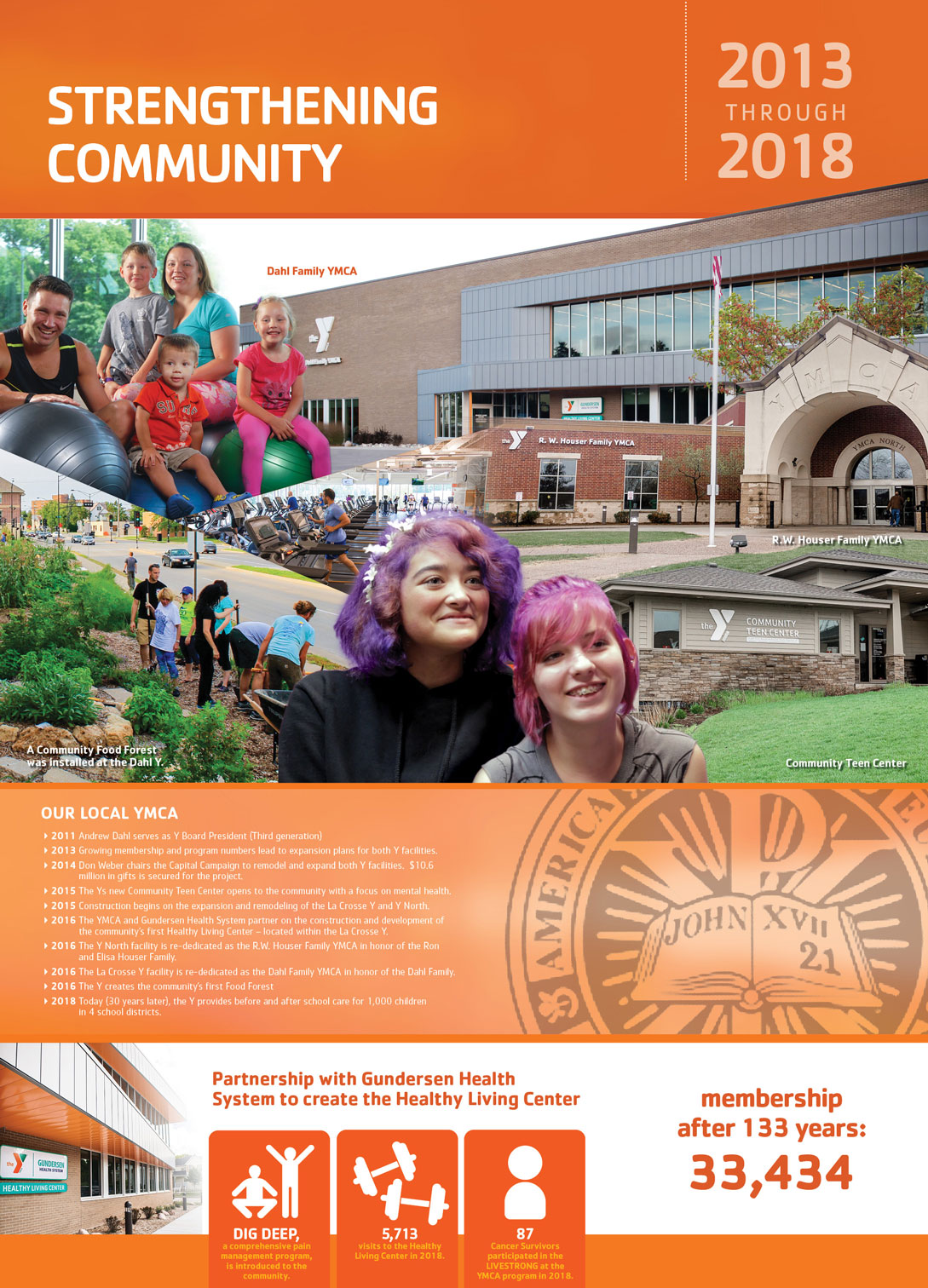